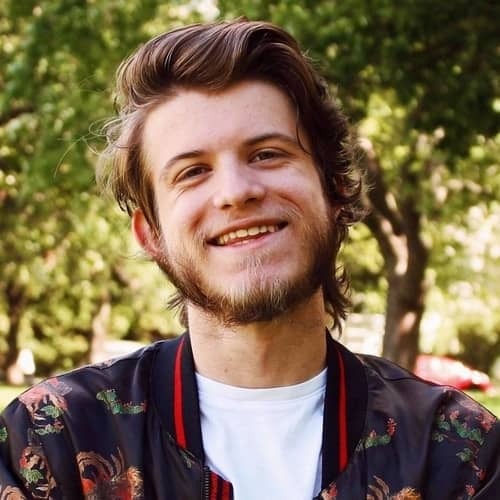 Let's take a look into the legend behind the "Follow Me To" project, Murad Osmann, and how he became the amazing photographer and Instagrammer influencer he is today.

If you were somewhat active on social media sometime between 2012 and 2016, you undoubtedly saw wholesome couple travel pictures where the photographer, standing behind the lens, would reach their hand to their partner standing in front of a dazzling landscape, and you may even have re-enacted one of these iconic photos for your own Instagram feed. However, you may be far less familiar with the name Murad Osmann, the travel photographer whose innovative Instagram picture sparked a widespread social media trend that has continued to this day.

From posting a seemingly goofy picture on Instagram to sparking a widespread Internet trend while building a successful international media career and even starting a family, the couple has become leading figures of social media travel influencers.

How did he do it? Let's dig in deeper through his life journey to figure out how he became who he is now.

How Did It Start?

Osmann was born in the mountainous Dagestan Autonomous Soviet Socialist Republic in modern-day southern Russia, bordering Georgia and Azerbaijan and a few hundred kilometers from the Turkish borders. His parents relocated to Moscow in 1990 when he was 5 years old, where he began to develop his passion for photography. A jack of all trades, Osmann graduated from Imperial College London with a bachelor’s degree in civil engineering in addition to improving his photography skills throughout university.

It was in 2012 that Osmann’s talent for photography catapulted him to Internet fame, while he was traveling through Spain with his girlfriend Nataly Zakharova. Zakharova would get annoyed at Osmann for constantly stopping to take pictures, stopped posing for his photos, and instead dragged him forward, an iconic moment that Osmann captured on his iPhone. The picture, which was later posted on photo-sharing application Instagram captioned “Follow me to Barcelona”, became an instant hit on the platform, attracting thousands of likes and about a hundred thousand followers.

It wasn’t long before other couples on Instagram picked up the trend, and parody accounts even hopped on this train to deliver humorous contributions.

Part of the trend can be attributed to the relatively effortless replicability of these pictures, which Osmann took with his own iPhone, taking advantage of the wide-lens camera and outdoor lighting. Although Osmann has now shifted to a more professional DSLR camera equipment, the more universal brand of iPhone landscape photos has made the “follow me to” trend one of Instagram’s favorites this past decade.

Building on their success from their website and Instagram photo project, the couple signed a deal with British publisher Skyhorse Publishing to write a book on their experience. Follow Me To: A Journey Around the World Through the Eyes of Two Ordinary Travelers came out in January 2015, compiling some of the best pictures taken by Osmann and Zakharova on their trips around the world and occasionally delivering personal comments on the photos taken and places visited. Later on, the couple earned the third spot on Forbes’ prestigious top 10 travel influencers list in 2017.

Taking their relationship to the next level, the couple got married in the summer of 2015. Osmann proposed to Zakharova in July 2014 and broke the news on his Instagram the way he knows best: by posting a picture of his new fiancee, back to him, while he reaches for her hand while holding a ring. This picture, captioned “She said YES!!!”, garnered over 475,000 likes on Instagram. The couple committed to their signature photo style again during the wedding, which took place in June 2015 in Moscow first, then in Osmann’s native Dagestan.

In a picture posted on his Instagram, Osmann is seen reaching for Zakharova’s hand as she walks into the Zhavoronki Event Hall, wearing a custom-made Vera Wang wedding dress. Osmann later posted several behind-the-scenes images on the Follow Me To website, where he is seen staging his signature photos with Zakharova.

Less than a year ago, the couple welcomed their firstborn son, Solomon, into the family. Osmann broke the news on his Instagram account in December 2020, just a few days before their son was born. While a baby would imply a drastic change of lifestyle for most couples, Murad and Nataly Osmann have found ways to include their son into their adventurous lifestyle, taking him with them on their trips across the world and even to attend award seasons. A wholesome new addition in Murad and Nataly’s lives, Solomon is proof of the couple’s success beyond just social media.

Where Are They Now?

Following the success of their pictured Barcelona escapade, Omsann and Zakharova undertook to replicate their signature photo in some of the world’s most breathtaking places, having extensively toured Europe, East, and Southeast Asia, the Middle East, and South America. The couple cited India, Singapore, and New York as their favorite destinations so far, Osmann revealed in a 2016 interview that his all-time favorite picture from the series remains the one where he proposed to Nataly.

Although you will rarely ever see so on their Instagram accounts, the traveling couple remains based in Moscow to this day, where both individuals work full-time jobs. Osmann spearheads his own media company, Hype Production, which he started in 2011 with producer Ilya Stewart. The company has grown to become one of Russia’s leading media production companies, directing award-winning music videos and feature films, some of which won prestigious film awards including Cannes Lions and the Berlin Music Video Awards.

Zakharova works as a journalist and blogger, having directed a series of video projects about traveling. In addition to their respective, fast-paced careers, the couple has launched a jewelry brand and have collaborated with several travel brands on a travel accessories line.

Thankfully, both Osmann and Zakharova still regularly contribute to the “Follow Me To” project, which is now mainly headquartered virtually on Murad’s own Instagram feature, as well as their website where they showcase some of their travel videos directed and edited by the couple. They spent this summer in Osmann’s native Dagestan, and have upcoming travel plans to Egypt in the fall.

Needless to say, the past 10 years have completely altered the life of Murad and Nataly Osmann. While for most of us, the pandemic has put many plans on hold and forced us into the confines of our homes, catching a glimpse of Murad and Nataly Osmann’s social media accounts feels like walking the gateways into an ethereal world where travel, imagination, and creativity coexist in perfect harmony.

While we can only dream to live the lives of Murad Osmann and Zakharova, there's one thing that we could do to follow their similar footsteps. Whether you're looking to take those gorgeous "Follow Me To" pictures for your Instagram, or if you just like to travel to amazing new places with your loved ones, we here at Pilot can definitely make that dream a reality.

Regardless of what your purpose of travel might be, you'll need to start with a great travel plan. Why not try out our new social travel itinerary planner app, Pilot? We make sure to keep all your tickets, itineraries, to-dos, and notes tidy and readily accessible to everyone going on the trip with you. Sign up now to give it a try!

Check your email!
Oops! Something went wrong while submitting the form.
join the waitlist
Originally published on:
August 4, 2021

Meet FunForLouis: The Top Travel Vlogger In The World!